The single most quality that helps us identify geography is shape.  Take those boundaries away and an ambiguity sets in blurring relationships that allow us to ground ourselves.  Take everything else away and the vastness and iconic territories are distilled only to the place names held within those borders.

This piece is about taking the context out of the 50 states in America.  Each territory is giving the same size canvas and on that canvas are all the places names from that State, randomly scattered.  From afar, density and color is now the gauge in identifying contextual localities.  Up close, the jumble of names become familiar and repetitive.

September 11, 2001 was not the beginning and, as we are ten years out, it is also not the end. It did though mark a very loud wake-up call to what some of us knew then and all of us know now as a global crisis in faith, cultures, and trust. We woke up one day and a lot of innocent people died and America’s iconic towers disappeared, but this was not, as a lot of people still do not comprehend, the work of one man in a specific space of time. This calamity has been unfolding over years and years with many players directly and indirectly involved.

When I opened up the book The 9/11 Commission Report and started reading, I was struck as to how much this read like a fictional novel. But what really resonated with me came in the preface. The sentence reads, “Our aim has not been to assign individual blame.” And this is a correct starting point because there really is not just one individual to be blamed for what was experienced on September 11th, and what we continue to experience today. The United States, among other nations, have had their hands mixing up the global dynamic to meet their current needs for a very long time. Allegiances pledged and won at one point have invariably been severed and swapped as foes. Those one-time allies are now using the support against them on the battle field. So, who is really to blame for the attacks on September 11th?

The piece Our aim has not been to assign individual blame (2009-2010) is about the ambiguity of our enemy and those involved either directly, indirectly or superficially, with September 11th. By taking all the names of the people mentioned in the Commission Report out of their original context, it blurs the relationship that person had in reference with this tragedy, either distorting or leveling the weight of their importance. But that blurring becomes less fuzzy when now looked at as a whole, on the canvas, due to the frequency of repetition of certain ‘players.’ Also, the randomness of the names now placed on the canvas provide interesting relationships and juxtapositions further blurring context and collusion.

These 48 squares represent the 48 continental United States. They are laid out in alphabetical order except for the 11 states (squares) that have a town named Somerville. Those 11 squares are roughly placed geographically according to the map of the USA. So the 11 squares are exposed, with the town Somerville in the center of the cutouts while the other 37 squares have a portion of the map of that state behind a floating white square with a reveal around the edges for a glimpse behind. The cut Somerville squares differ in contour steepness according to the density and size of the cities compared against each other.

The phrase, “The medium is the message,” was coined by theorist Marshall McLuhan and was used to explain the concept of figure-ground. The theory was that in order to fully grasp the impact of a concept, the figure (the medium) and the ground (the context) should be examined together, “since neither is completely intelligible without the other.”

This is how I see the relationship between the piece The system was blinking red and the piece Our aim has not been to assign individual blame. One could not exist without the other and together they tell a more complete story.

Inside the book, The 9/11 Commission Report, there is a chapter titled Heroism and Horror. This chapter describes the 102 minutes of the morning on September 11th, in grizzly detail. Through this chapter we re-live the planes crashing and the towers falling. Blanketing the city in massive, forceful clouds of smoke and dust. It is in this section that a new figure has been cut into this ground, which depicts the towers standing tall then falling to dust. Through a short time lapse video the book reveals the voids from page to page. And towards the middle the voids decrease in intensity and the twin towers appear and then quickly disappear. Providing further context to the cut pages and voids containing all the missing names that quickly flip by. 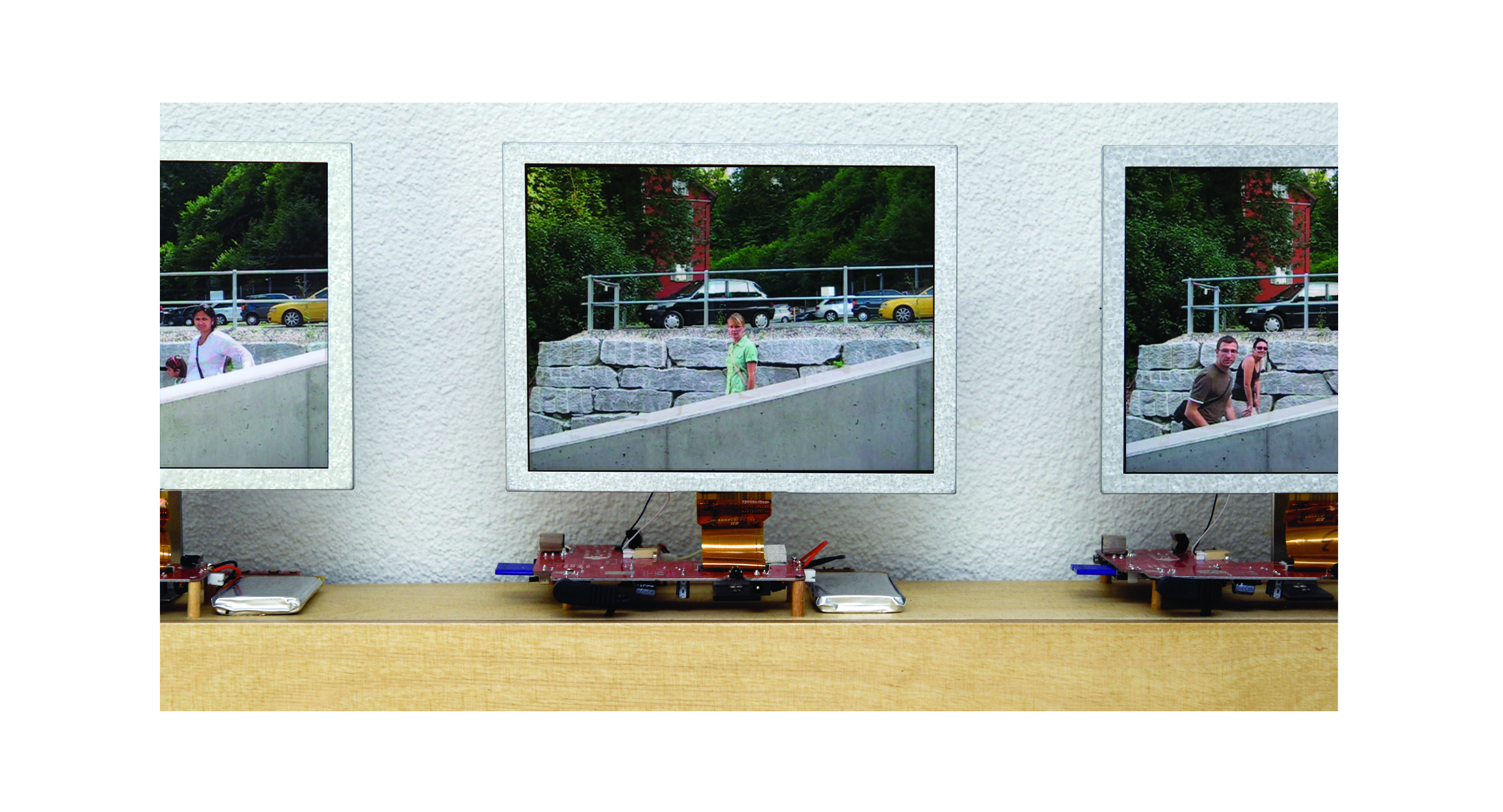 The sculpture, “Reverse Voyeurism,” is essentially four crisp, still images of the same landscape. Four LCD screens play through independent sixty-minute loops. Countless voyeurs peering in at you as you are watching them. Images appear to be static, but then your eye catches movement –someone walking through the frame…and they are looking at you. Then they are gone. A few seconds later on a different screen, more voyeurs. And then, movement on a third screen. And the fourth. Back and forth, your eyes scan screen to screen watching these voyeurs look in at you. It becomes captivating to compare the passers by reactions – how bold will the voyeurs be? Who is watching who? Included are a few video clips taken from this project.