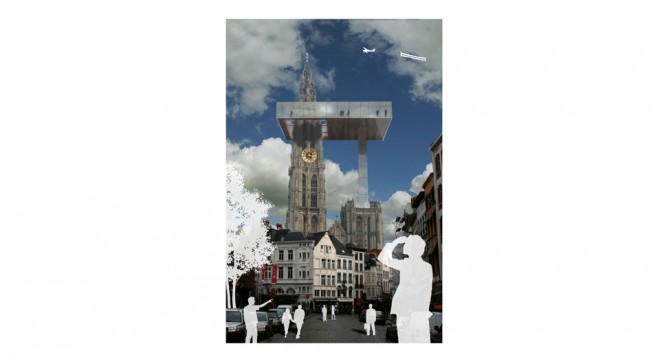 You are a pilot. You fly small planes over populated areas disseminating some corporate slogan or another, usually something you don’t necessarily agree with, in order to pay the rent and send the kids to school with proper shoes. You are high in the sky most days with a perspective not easily had by the common person. But even with all this time being elevated, being physically closer to the Gods, it won’t make you a better person and won’t improve your chances of getting to heaven. But having an elevated view might potentially elevate your mind. Free it from the mundane constraints of being grounded. Allow one to consider the spiritual possibilities that await. This potential is what the Scandere Chapel will offer the worshippers, global travelers and every day citizens of Antwerp.

The Cathedral of Our Lady in Antwerp has had a long and difficult history. The first, and what would end up being the final, stage of construction of the Cathedral was completed in 1521. Now, after almost 500 years have gone by, there is an opportunity to continue where the master Architects have left off. There is an ‘absence’ above the south tower. However, in this absence there is nothing truly to be missed. The Cathedral has lived on just like the south tower never intended to exist in the first place. When something has not existed from the beginning, and it is not missed, then this presents a blank canvas for new ways of thinking. History should not be forgotten. But it also would be a travesty to literally regurgitate and build a historical thread of thought taken from the 16th century as if we were still living in that time. The original Cathedral architects, Jan and Pieter Appelmans, if they were alive today would not want to merely implement the design that was on the drawing board 500 years ago. They would surely insist on designing something that takes into consideration the breadth of knowledge that has been gained over the last 500 years. They would insist on making a meaningful, purposeful and profound statement to the city and world through their architecture.

Repose, reflection, religious ceremonies, and revenue. The experience of the Scandere Chapel officially begins at the base of the south tower. It is here, in the darkness, one becomes aware of a rectangular shaft of light emanating through the center of the roof and touching down to the ground floor. Like a bolt of light being directed down from the heavens. One enters this orb and either ascends, slowly, walking up step by step, winding around the perimeter core. Or, ascending quickly using the translucent enclosed elevator lift, one reaches the chapel. This space accommodates the more intimate weddings and funeral services. The Cathedral can hold up to 25,000 people and comfortably seat 2,400. So the chapel is intended for private and personal services, accommodating from just a few to under 200 people.

Another main goal of the Scandere Chapel is for the generation of revenue. The Cathedral costs upwards of 1.5 million Euro per year to maintain. Currently donations are made by visitors and also for ceremonies such as weddings but this revenue will substantially increase with such an icon and the promise of visual and mental expansion. Many people, including tourists to Antwerp, will wish to take the sky lift for magnificent views of the city. Also, visitors will be able to walk completely around the north tower and take in all of its historical grandeur as if they were angels with wings guiding them high up in the air.
. 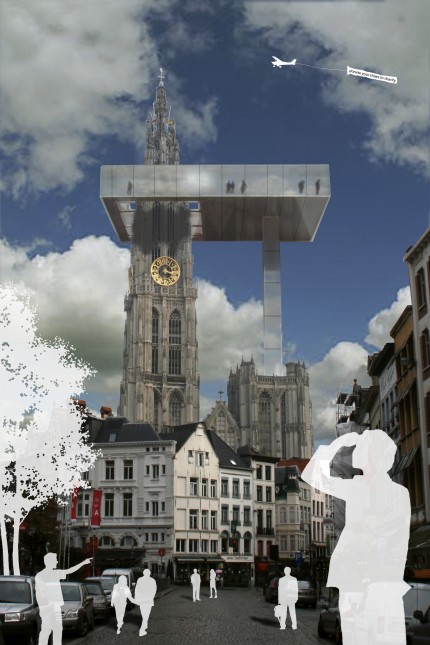